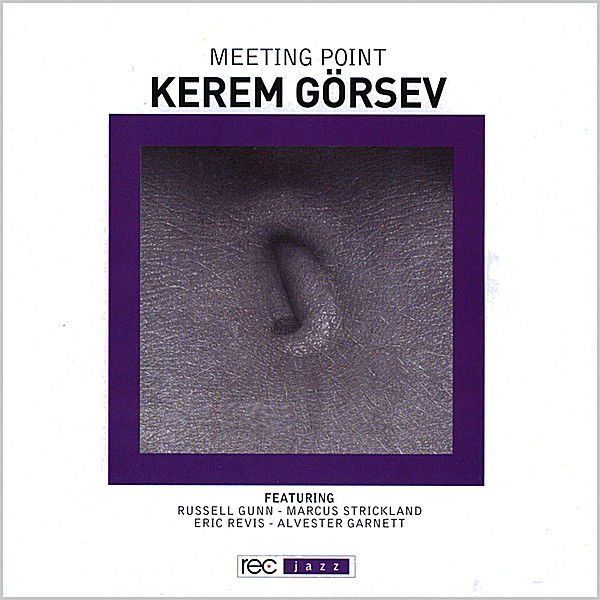 “Meeting Point” is Kerem Görsev’s ninth album. He began his adventure in1994 with his first album “Hands and Lips”. He has reached a very impressive point since then. His pieces give enormous listening enjoyment with their even more powerful harmonies, the melodious phrases, the sweet transition among the group musicians and their contribution to the pieces. Kerem Görsev is a jazz lover who knows how to ignite his fellow musicians, constantly improves is condition and discipline and learns more everyday. He has never been a complete “professional”. A side of him always stayed an “amateur”. His happiest moments have always been the long club hours and his hours of work on his jazz compositions. He believed that jazz should be shared and lived in the clubs.

His is now 43 years old. He has been with music since he entered the conservatory in 1967. He has been playing continuously since he became a professional jazz musician 1983. He is always listening jazz music and improving his technique. He is always in search of new CD’s and DVD’s by musicians he admires. He is sharing and discussing them with his friends.

The latter half of the century has shaped his passion for jazz. His first admirations were for Parker and Miles. After this, he has always liked bop and be-bop music. This influence has been persistent throughout his professional life. He never fails to mention how good he feels when listening to Bill Evans.

He is an optimist, musically sensitive, willing and productive. He is at peace with everyone around him. His wife Pınar and his 4 year old daughter are the source of his inspiration. He always plays the piano while Nisan is playing at home.

For many years he has worked at night clubs where he has accompanied vocals from USA at the piano. Not only he has learned a lot from them, but he also achieved a performance he couldn’t have attained at Berklee. He learnt the secrets of accompanying a soloist. He generally worked 6 nights a week. With his earnings, he produced his firth album.

His concerts at Istanbul Jazz Festival sponsored by Garanti Bank and Akbank Jazz Festival were not to be missed. For 3 years, he featured important jazz musicians at his own club in Teşvikiye. During the recording in New York, his friend Eric Revis from the Branford Marsalis group, asked him how he managed to produce such long pieces of musical phrases and harmonies. Before the recording, small arrangements were made as a group. All musicians really felt and owned the pieces. Long solos in the partitions were shared by the musicians . This gave more dynamism to Kerem Görsev’s music.

The result is an album with 9 romantic compositions that complete each other. Jazz fans will love these melodic pieces. On this album, our country’s most productive composer is playing with significant jazz musicians in at the center of the musical world , New York. Russell Gunn, Eric Revis, Alvester Garnett and Marcus Strickland are accompanying Kerem with pleasure.

This CD will hold an important place in Kerem Görsev’s musical life.