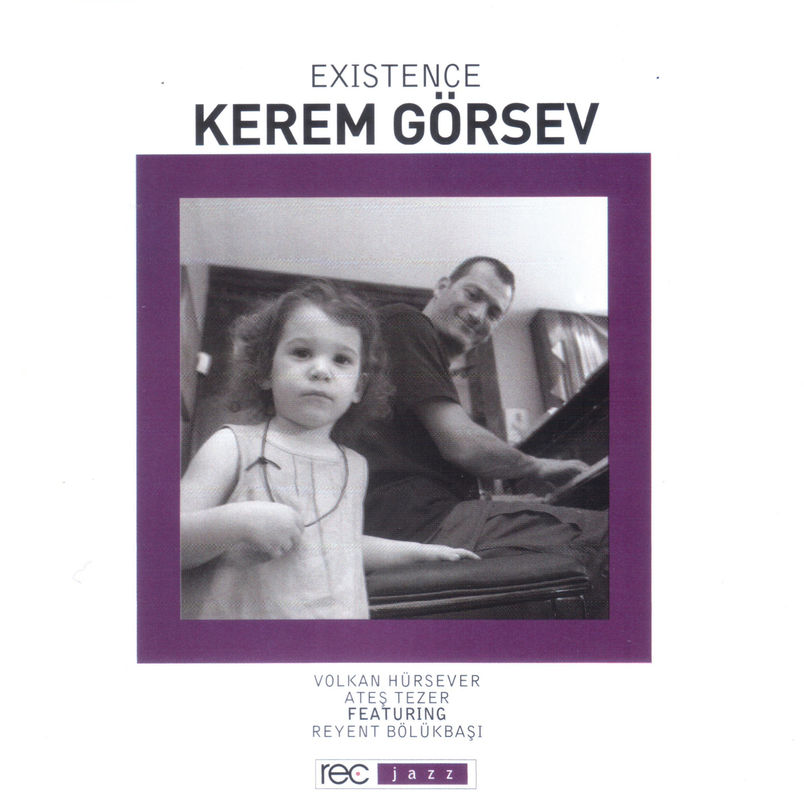 What is “Existence” and how did it happen?

When my daughter Nisan was born on April 10, 2000, my friends and everybody around me started asking when I would make an album for her. I was really bothered by these questions. I felt that I wasn’t obliged to make an album for her and I had never expressed ideas and feelings that I hadn’t experienced in my music. However, as Nisan started to grow, my communication with her evolved rapidly. I was enjoying a very strong and pleasant bond with her and this album was completed in five months.

SIn this album, all compositions except for “Flying Notes” are new. “Back Home” is a very special piece. I composed it for my dog, Bebop, who had been poisoned . The whole piece came out in 10 minutes after Bebop returned home from the hospital and was lying on the couch in a meagerly. I have created “Friend’s Daughter” for my dear friend Hakki Misirlioglu’s daughter, Kiraz. It is collage piece that I have composed while looking at her mini photo album.

All other pieces are dialogs between me and my daughter..

“Be-Be-Be “, Nisan trying to explain me a butterfly “Who Knows?” , Nisan’s future, maybe a musician?

“Existence”, The Story “Gak-Guk”, Nisan’s nickname “Tea Party”, Nisan having a fun tea party with her friends Zeynep and Lal “Dreams with Barney, BJ and Baby Bop”, Nisan’s sleep friends in her crib.

In this album, other then Ates, Reyent, Volkan and I were all musicians with classical backgrounds. However, Reyent is the one who is deeply involved with classical music and he is the one who has performed the pulling and running with his cello and the nuances to create the magical sound. He has performed astounding virtuosity. Volkan , strong, assured and with his own timbres, added the arco sound that I have been missing so much. Ates revivified our magic in “November in St.Petersbourg” album in the quartet format.

All rehearsals were held at my house. Recording was done at ITÜ MIAM studios in seven hours.

I am very happy. That’s all!

A father’s eye: the tender touch of maturity

Versatility is a virtue. It requires those wiggily invisible antennae that track all the tiny details that give existence its meaning? The tantalizing whiff of something mesmerizing as you round the street corner, a sudden wink to upset the gravity of the moment, a smile in an elevator; a sigh at dusk…

Meaning never really shows its face but murmur in a subtle, quiet voice. And sometimes if we’re lucky, we can feel the secret rippling right through the soul. But it’s really up to us.

There are two actors in the new album of Kerem Görsev: Merry children dancing to waltzes, and elderly voices of melancholy and joy. We are being asked to enjoy the circle of life, the mellow stories of closure.

If you were looking for Görsev during the 1990s you would see him searching too. He represented in Turkish jazz that never-ending quest, the breathless pursuit of the right voice. From his magician’s hat he extracted in quick succession any number of moods to write, to compose, to tell his stories. However much Gorsev admires the great Bill Evans, for him to cultivate just one format would be a terrible betrayal of his inner self.

Versatility is not possible without receptivity. Görsev has been influenced by the likes of Tommy Flanagan, Red Garland, Alan Broadbent, McCoy Tyner, Kenny Barron… To inspire you have to know how to be inspired.

He has worked his way through the musical arithmetic of quintets, trios, duets, sextets. He has recorded original material with a symphony orchestra. He sees every instrument as an endless possibility to be turned upside down, inside out in the drive for new expression.

This is his season for the quartet, but not the usual jazz foursome. It includes the incredible presence of Reyent Bölükbasi – a virtuoso and one of Turkey’s most underrated musicians. His cello with its aching voice allows Görsev to slip into a melancholy. It is a mood that is instantly familiar and impossible to resist.

Why is this album so seductive? My own answer it that emanates joy. There is a domestic warmth to the sound, an enduring image of smiling children, a perpetual game of hide-and-seek that imperceptibly evolves into the deep trance-like melancholy of a father reflecting on a great mystery – and as if for the first time.

This is Görsev’s reflection on maturity. He is now seeking, tenderly, to play less in order to tell more. It is a journey full of wonder. Görsev’s guide is only two years old – or was when the album was born. His daughter Nisan with her smile and simplicity and oh, that look, asks all those questions a father can only try to answer. Listen to the leading statement in his composition “Existence”. You will hear a calm struggle there, a search for the right reply to innocence. And if the conclusions are ambiguous, that’s the way it sometimes has to be with children.

The album is meticulously plotted and crafted with care. If that means there is less space for improvisation than previously, Görsev writes in the way that makes the whole composition sound like one tender improvisation from beginning to the end. With the exception of “Flying Notes”, which lets the musicians to soar to a from the musical context, the other compositions float on a river of calm emotion.

The sound of Bölükbasi’s cello is full of body. It is amazing to hear a great artist of the classical school finding elbow room at a table occupied by jazz musicians. Ates Tezer, a veteran jazz drummer is as versatile as Görsev himself. He creates a harmony with his brushes in the slow flows of the compositions and is never overemphatic in his markings of time. And here, in this album, you will find an emerging star: Volkan Hürsever, who completes the transition to find his own voice and timbre. His double bass is no less impressive for being so very consistent. This is Görsev’s eighth album in eight years. Each stop on the journey so far was telling something about the aspirations of his soul.

I believe this one, “Existence”, will tell us more about emotional depth of Görsev’s musical world. Thankfully, that journey is not over. You can be quite sure, he is already there, somewhere out in front of us, asking on our behalf “What’s next?”