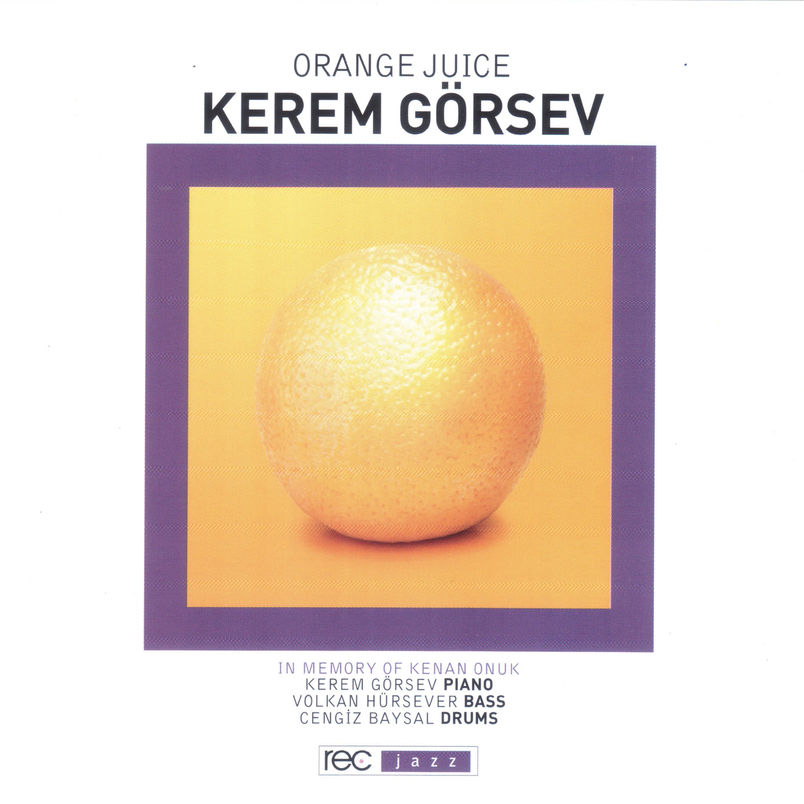 I have first met Kenan Onuk in early 1990s and since then he has been my valuable friend with his smiling and brightened face. In the sporting world, he was equally very much liked and admired by his colleagues and viewers. Since 1980 Moscow Olympic Games, he commentated on all sports events with such admiration and passion that he single-handedly popularized athletics and ice skating in Turkey. “90 Minutes” was his last show at NTV and his serene and logical leadership during the show helped greatly in the fight against violence and fanatics in football. As one of my dearest friends, I would always take copies of my albums to him immediately after the recording sessions. I feel very lucky to have the inside notes for my album “Meeting Point” by him. We would talk over the phone and meet weekly, to talk about festivals, jazz concerts and Fenerbahçe in his office at NTV. I will miss Kenan Onuk deeply. “Orange Juice” is dedicated to him. Kerem Görsev

Kerem is not the sort of person who would rely on values created by others. I remember him saying that all his compositions are based on his real time experience. He is the sort of musician who nourishes a caterpillar with fresh leaves before it becomes a butterfly, then waves his silk yarns into fabrics, and finally he saws clothes out of this material he has created. Just like the caterpillars, which become butterflies after, the lives of jazz musicians are musical journeys in time. Yet their cocoons are the music that they feel deep in their hearts. This music takes them away to places yet not conquered, and the albums they bring back from these journeys are expressions of what they have experienced in sound. Each album in this long journey is a pit stop for a taking a fresh breathe and a preparation for the next album. “Life goes on forever, the musicians on the road change yet the concepts stay the same.

“Orange Juice” is the last pit stop in Kerem?s musical journey. It is a stop for taking another breath and remains of what has been lived and conveying these to music lovers. Two leading young lions of the Turkish Jazz scene accompany Kerem on this journey. Bassist Volkan Hursever and drummer Cengiz Baysal are both witnesses to this incredible journey as well as contributors to it.

All pieces in the album are stories told out of Kerem’s own life. The opening piece “Sunday” describes the relaxed atmosphere of the last day of a week and the magic pleasures of reading papers, the joy of a full breakfast.

“Orange Juice” is about the energetic happiness a freshly squeezed juice may give to a person.

“Serenty” is piece commissioned by Görgun Taner of Istanbul Culture and Art Foundation for the movie “1923 Burneau Sunset”. Kerem and Erol Erdinc, a prominent orchestra chief and jazz aficionado, played the original version as duo pianos. The dream introduced by Volkan on base is developed by Kerem to further horizons..

For fathers, the daughters are their ultimate loves; “Name of Love” is a tribute to Nisan, Kerem’s lovely daughter expressing the intimate feeling of a father to a daughter.

“Respect” is another tribute; this time to Kerem?s his own mother, but eventually to all mothers.

“Brunch” is humoresque and a lively approach by Kerem to the concept of a Sunday fiesta.

“Yellow” is an ode to the yellow sparrow, Kerem?s jazz lover bird which has passed away recently, It also reflects the regret that no recording of her beautiful sound has ever been made.

The last piece “Unagi” is featuring bassist Volkan Hursever who is a true sushi Pac man. Yet both Cengiz and Kerem share this gourmet passion.

Sushi’s is not the single passion they all share. Both Cengis and Volkan contribute their personal accumulation of musical experience to this bouquet of stories told by Kerem and the end result is a true musical fiesta

The whole journey becomes a breath holding race where everything is shared equally by solos of musicians involved and eventually reaches the jazz fans as music. It is hard to believe that the whole thing was recorded in six hours only. Yet the six hours may be too long a recording session if you remember the long musical heritage of the artists involved.

And the music in this album is not confined to jazz alone; one may feel the breeze of other musical languages while listening what is put on the table.

I believe that like his other albums in the past this album too has a statement for those who have passion and imagination.

We all have dreams; life is about people who may realize their dreams and those who may never do that. The musicians who have created this album certainly belong to the first group.

There is another caterpillar around, a person reaches and nourishes him with fresh leaves, soon the caterpillar will be gone and a beautiful butterfly will appear, and there will be silk yarns left behind, and the beat goes on…